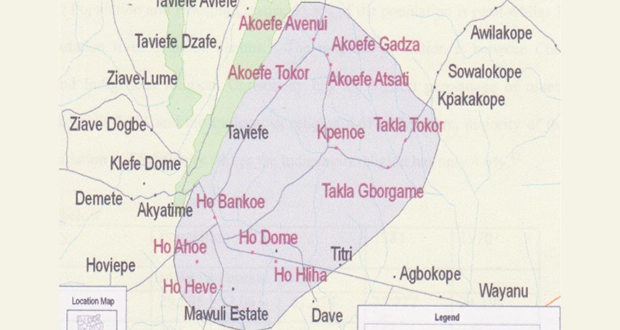 The Asogli people are the dominant group in the Ho Municipality. Asogli State comprises four traditional set-ups, Akoefe, Ho, Kpenoe and Takla. These four traditional set-ups were founded by the direct descendants of Togbe Kakla. Ho serves as the seat of the paramountcy. The Asogli State Council, the traditional ruling council, comprises the Agbogbomefia, Togbe A?ede XIV, who is the President, Paramount Chief of Akoefe, Kpenoe and Takla and the five Divisional Chiefs of Ho.

Part of the remains of the wall of the ancient city of Notse,Togo

The Asogli people, like most Ewe speaking people, trace their origin from a place called Abyssinia in what is now Ethiopia. They migrated with other Ewes from Abyssinia to Oyo in Yorubaland, Western Nigeria. From Oyo they went to Ketu in Dahomey (now Benin) before settling at Notse in present day Republic of Togo in about the 12th century.

Oral history has it that in their settlements at Ketu and Notse, the Ewes lived in walled cities called Agbome, literally meaning within the fence wall. At Notse, the Ewes were ruled by a tyrant, King Agorkorli whose sadistic rule is reported in the historical records of all Ewes.

The Asoglis naturally detested the rule of King Agorkorli and, under the leadership of Togbe Kakla, they broke through a portion of the fortified wall for all Ewes to escape. Togbe Kakla and his people broke the wall after softening it through a planned and persistent splashing of water.

The conspiracy included a deceptive plan under which the escaping subjects walked backwards out of the walled city. The objective was to create the impression that the footprints they left were those of people who had entered the city. This confused the King?s soldiers and by the time they realized what had happened, most of the subjects had escaped to freedom.

?Gligbayi?, the dagger which Togbe Kakla used in breaking through the wall of Notse, is a sacred relic of the Ewes. It is in the custody of the Agbogbomefia, the traditional overlord of Asogli State.

Togbe Kakla and his people broke away from the larger Ewe group to settle at Komedzrale, near what is now Ho, the capital of the Volta Region of Ghana in West Africa. At Komedzrale, the Asoglis engaged in subsistence farming and hunting.

Oral history has it that Togbe Kakla had three sons and a daughter. These were Akoe, Letsu, Asor and Esa. As Komedzrale lands gradually lost their fertility and could no longer support any meaningful economic activity and the growing population, the Asoglis migrated further.

Dynasty of the Royal Family

Inheritance among the Ewes and among the people of Ho is patrilineal. Succession to the chief?s stool, the most important symbol of authority, is also patrilineal. However, when there is no male heir, an acceptable son of a daughter of the royal house may be enstooled. This is rare and this son would normally perform the role of a regent.

The role of honour of succession to the Royal A?ede Stool of Ho Asogli is traced to the descendants of Asor who ruled under different names. The following were the occupants of the A?ede Royal Stool:

The periods of reign of the first eleven Kings were not recorded.

Ho is made up of five main divisions, each of which is administered by a divisional chief who is assisted by his council of elders which includes the Asafofia (warlord) and Sohefia (youth leader).

Among these five divisions, Bankoe is the seat of the paramountcy and is administered by the Agbogbomefia who is assisted by a host of traditional office holders. They include: the Afetorfia Gbedodala, who is in charge of the customs and traditional practices of the state; the Atamfia, the custodian and administrator of the Great Oath of the Asogli State, and the Tsiamiga, the paramount linguist, whose staff of office announces the presence and authority of the Agbogbomefia. There are other equally important office holders who serve on the Council of Elders of the paramountcy.
The Bankoe Division takes the ?Ali? (the waist) of any customarily slaughtered animal symbolizing its position and authority as the seat of the paramountcy.

The Heve Division is led by the Ngogbefia, Togbe Anikpi III, the vanguard chief. The administrative set-up of Ho also defines the security and military structure, which was quite relevant in the olden days of inter-tribal warfare.
The Heve Division therefore performed the traditional military function of spying on the enemy and providing intelligence for the main army divisions in times of war. During peacetime, the role of the Heve people involved providing leadership in the identification and recommendation of development projects, which would facilitate the progress of the community. Their portion of a customarily slaughtered animal is called the Anyinor.

This division was very instrumental in the 18th century victorious exploits of the people of Ho on the battlefield. Dome is headed by the Avafiaga of Ho, Togbe Adzi Lakle Howusu XII, who also doubles as the commander of the left wing of the local troops.
The Awafiaga takes the Akor (the chest) of any customarily slaughtered animal, symbolising readiness to face the enemy during war. At peacetime, he stands ready to provide leadership in the implementation of any developmental programmes that the people may decide to undertake.

The people of Hliha occupy the rear of the administrative set-up. They are led by the Megbefia (rear guard chief), Togbe Kwasi A?ele II. Their main function is that of maintenance of peace and stability. All customary rites aimed at fostering peace are therefore performed at Hliha. The Megbefia takes the Akasia of any customarily slaughtered animal.

The chiefs of the five main divisions of Ho Ahoe, Bankoe, Dome, Heve, and Hliha constitute The Ho Traditional Council, the traditional governing council of Ho. Apart from the chief, each division has its own queen mother and other functionaries. The divisions are made up of clans, each one of which performs a specific function within the division. While some clans provide the linguists, others provide the town criers, the drummers, the custodians of the customs, etc.

In 2004, Togbe A?ede XIV brought back the celebration of the Yam Festival which had been abandoned for over a decade. With the goal of educating and entertaining both Ghanaians and visitors about Asogli traditions, the Yam Festival provides an opportunity for experiencing traditional music, dance, story-telling and a grand durbar to climax the festival. Togbe A?ede XIV has provided leadership in uniting many chiefs throughout the Volta Region and extending to other parts of Ghana and Togo. As a result many of these chiefs attend the Yam Festival. Togbe has stressed the importance of different tribes and ethnic groups living in harmony. He has emphasized the need for good governance, tolerance, and hard work in order to assure individual and national development.

Yam is called ?ete? in Ewe. The word literally means it is swollen. Oral history has it that a hunter on his normal hunting expedition discovered the crop in the forest. It was during the famine period but instead of taking his newly discovered tuber home, he decided to hide it in the soil for use some other time. When he later went back for it, to his dismay, the tuber had germinated and grown bigger. This was how the cultivation of yam started.

The celebration of the Yam Festival by Ewes was brought down from Notse in the Republic of Togo where it is still celebrated. Yam cultivation is a very tedious job, and history has it that in those days some people who ventured into it did not live to enjoy the fruits of their labour. It was, and still is, labour intensive, energy sapping and quite hazardous, hence the proverb ?Ne wonye eteti tsogbe wo dua ete la, ne egbor ma kpor etsroa ha du o?. Literally, this means if it were during the day of planting of yam that yam is eaten, the goat would never taste the peel. Diligence was therefore required and the permission and guidance of the gods of the land and the ancestors was sought during the entire period from planting through harvesting.

During the harvest time which is normally in September, the gods and ancestors are served first with the boiled and mashed yam, normally white and red-oiled, called ?bakabake?, before any living being tastes it. This rite is called Dzawuwu?. After that, the rest of the mashed yam is eaten as a communal meal, a symbol of unity and reconciliation of families, clans and the entire community.

Today, the Yam Festival is celebrated:

As a thanksgiving to God, and also to the gods and ancestors for a bumper harvest, and as an occasion to offer prayers for good health and prosperity for all.To foster unity through forgiveness and reconciliation.As an annual stocktaking event for all occupational endeavours, especially farming.To mobilize both human and material resources of Asogli State for job and wealth creation.To serve as an annual re-affirmation of allegiance by all chiefs and their subjects in the Asogli State to the Agbogbome stool.?Asoglistate.com