Ho is made up of five main divisions, each of which is administered by a divisional chief who is assisted by his council of elders which includes the Asafofia (warlord) and Sohefia (youth leader).

Among these five divisions, Bankoe is the seat of the paramountcy and is administered by the Agbogbomefia who is assisted by a host of traditional office holders. They include: the Afetorfia Gbedodala, who is in charge of the customs and traditional practices of the state; the Atamfia, the custodian and administrator of the Great Oath of the Asogli State, and the Tsiamiga, the paramount linguist, whose staff of office announces the presence and authority of the Agbogbomefia. There are other equally important office holders who serve on the Council of Elders of the paramountcy.

The Bankoe Division takes the “Ali” (the waist) of any customarily slaughtered animal symbolizing its position and authority as the seat of the paramountcy.

This division was very instrumental in the 18th century victorious exploits of the people of Ho on the battlefield. Dome is headed by the Avafiaga of Ho, Togbe Adzi Lakle Howusu XII, who also doubles as the commander of the left wing of the local troops.
The Awafiaga takes the Akor (the chest) of any customarily slaughtered animal, symbolising readiness to face the enemy during war. At peacetime, he stands ready to provide leadership in the implementation of any developmental programmes that the people may decide to undertake.

The people of Hliha occupy the rear of the administrative set-up. They are led by the Megbefia (rear guard chief), Togbe Kwasi Aƒele II. Their main function is that of maintenance of peace and stability. All customary rites aimed at fostering peace are therefore performed at Hliha. The Megbefia takes the Akasia of any customarily slaughtered animal.

The chiefs of the five main divisions of Ho Ahoe, Bankoe, Dome, Heve, and Hliha constitute The Ho Traditional Council, the traditional governing council of Ho. Apart from the chief, each division has its own queen mother and other functionaries. The divisions are made up of clans, each one of which performs a specific function within the division. While some clans provide the linguists, others provide the town criers, the drummers, the custodians of the customs, etc. 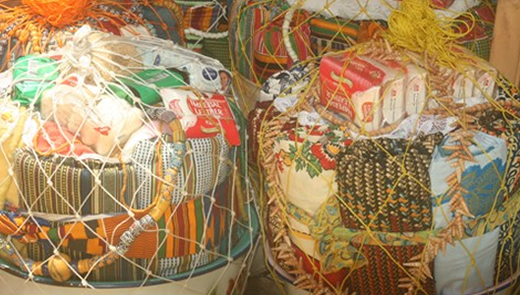